Belgium’s DEME Group has welcomed the new year with a keel laying ceremony for Spartacus, to be the most powerful cutter suction dredger in the world, at the Royal IHC shipyard in Krimpen aan den Ijssel in the Netherlands. 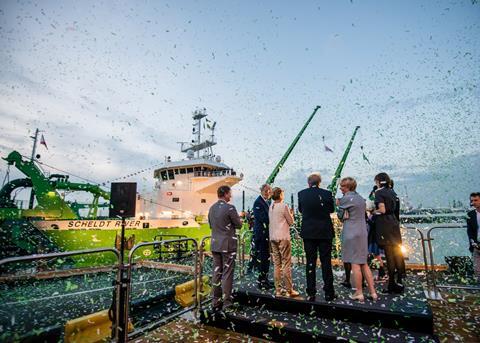 With a total installed power of 44,180kW the vessel will be able to cut harder soils at speeds previously impossible. This will allow certain works to be undertaken by the cutter dredger rather than reliance upon the use of dynamite for blasting.

Spartacus will be able to dredge to depths of 45m, extending the capabilities of mega-cutter suction dredgers, and is capable of operating in remote regions with limited infrastructure due to its fuel autonomy and accommodation capacity. The environmentally friendly cutter suction dredger will have other innovations on board such as a waste heat recovery system that converts heat from the exhaust gases to electrical energy.

Spartacus will follow on from the recent naming ceremony of Scheldt River, the 8,400 m3 capacity trailing suction hopper dredger which is the second vessel in the DEME fleet equipped with dual fuel engines. Also built by Royal IHC, it is part of DEME’s multi-year fleet investment programme which aims to further increase efficiency, both in terms of productivity and environmental performance. Scheldt River will deliver enhanced dredging performance in shallow waters whilst meeting and exceeding all current emission regulations, even in emission control areas such as the North Sea.

Scheldt River is equipped with two speed propulsion gearboxes and combinatory mode propeller thrust control which will result in at least 10% fuel savings during dredging operations. The vessel also has a Dynamic Position & Dynamic Tracking system which further enhances manoeuvrability and position keeping.

The vessel’s dredge pump is driven by a hybrid drive-diesel direct plus electric motor. Efficient power management solutions are made possible as the dredge pump achieves excellent performance both in trailing and shore discharge mode. Scheldt River also features one man bridge operation which increases efficiency and ease of handling. The dredger is designed and built to allow an Extended Dry Docking Service interval of 7.5 years, meaning less time lost in dry dock.

The first such vessel, Minerva, had entered the DEME fleet earlier last year and gone to work performing trenching works for the Rentel offshore wind farm near the Belgian coast. Both Minerva and Scheldt River will soon be deployed on seabed preparation works for Elia’s Modular Offshore Grid (electricity plug) in the North Sea.