Cowes Harbour Commission (Isle of Wight, UK) is looking at redeveloping its Kingston Wharf in East Cowes as a marine focused industrial estate. 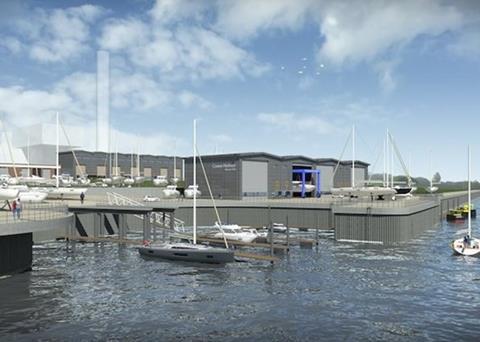 The development would create additional commercial units for marine companies

Cowes Harbour Commission (CHC) has had a harbour workshop at the Kingston Wharf site in East Cowes since 2000, then leased and developed the boatyard operation in 2004 and acquired the site and wharf in 2012. The 10-acre waterfront marine employment site is home to the Cowes Harbour Services Boatyard, Commercial Marine Operations, and Self-Storage facility, as well as a number of onsite independent business tenants.

The former aggregates site and wharf has been marketed for a couple of years but without significant resulting interest. CHC has therefore been considering alternative and strategically beneficial opportunities for further developing the potential of the Kingston site with its all-tide deep-water access and wharfage. As a result, CHC commissioned a feasibility plan from a project manager led team of architects and civil and structural engineers to investigate the potential for partial redevelopment as a marine business park and boatyard facility to re-establish the long-term viability of the site.

Due to a strategic shortage of marine based industrial accommodation on both sides of the River Medina and in the Solent region, the CHC Kingston project team considers there is an opportunity to redevelop parts of the Kingston Wharf site to attract new commercial marine tenants. An outline plan has been developed that maximises the potential of the site in terms of new development, whilst also retaining CHC’s existing Boatyard storage facility on the middle terrace. The design allows for a larger hoist to be accommodated, should this be required in the future. Although outline at this stage, the development would create additional commercial units, with seven starter units on the upper terrace and four larger units on the lower terrace.

At the CHC Board meeting in October, Commissioners reviewed the latest proposals for the regeneration and redevelopment of Kingston Wharf and agreed a recommendation to consult with the Cowes Harbour Advisory Committee (CHAC) prior to commencing the process for seeking outline planning permission from the Isle of Wight Council. The Board also agreed to progress the initial estimate costings into detailed costings and acknowledged that the scheme will have a funding shortfall that would require some form of grant funding support. CHC acknowledges that the development may need to be delivered in phases based on the business plan, which is being progressed, and the funding situation.

The initial phased development is likely to be driven by the new income revenue that can be achieved by expanding the boat storage facilities onto the lower terrace and utilising the two wharves for larger vessels and the potential addition of pontoons. There is also capacity to increase the size and number of boats that can be lifted by investing in an additional hoist for small vessels and in time increasing the size of the current hoist.

The subsequent phases will see the construction of the new commercial units where there is proven demand from occupiers. The first step is to make this strategic intention clear by submitting an outline planning application to enable CHC to react to market demand. CHC believes this is the right time to make this commitment to regenerate Kingston Wharf, for the benefit of the whole River Medina and port of Cowes.