Med Marine is a Turkish shipbuilding company and Turkey's leading tugboat operator, providing a broad range of services in towage, pilotage and mooring in the busiest ports of Turkey.

Since its establishment, Med Marine has successfully  finished construction of around 120 projects including tugboats, chemical/oil tankers, mooring and pilot boats. Med Marine is capable of constructing tugboats between 20 TBP and +100 TBP; and mooring/work/pilot and crew boats between 8m and 20m. Med Marine Ereğli Shipyard, one of the largest shipyards in Turkey, for building tugboats and chemical tankers.
Med Marine builds state-of-the-art technology tugboats and Stainless Steel (STST) IMO II type chemical/oil tankers; some of which were delivered to international companies and to the Med Marine fleet.
Med Marine's operational service areas are harbour towage, deep sea towage, pilotage, emergency response, salvage and wreck removal, pollution prevention, ship escort, tugboat operator and chartering. Med Marine's fleet consists of ASD type and conventional tugs ranging from 30 TBP to 70 TBP all built at Turkish shipyards.
Combining excellence in design and years of experience, Med Marine maintains the highest global standards in its business in order to meet its multinational clients’ needs.

Providing pilotage, towage and escort services throughout the Gulf of Izmit region and in Iskenderun Harbour borders of Turkey; Med Marine is available to meet your both towage and pilotage navigations, and berthing requirements at any time, day or night, 365 days a year.

From the smallest coaster to the largest tanker, Med Marine's fully integrated towage, pilotage and ship escort services ensure the safe commencement or termination of any voyage. 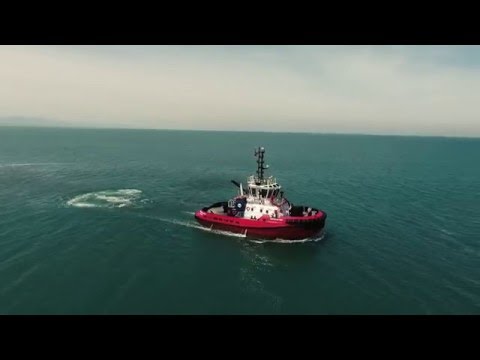 There are no fewer than 16 deliveries to report this month, eight of which are a series of Rotortugs for the same owner from two yards in Vietnam and China.

Med Marine is providing a steady stream of news of late reporting two additions to its fleet of tugs and an agreement to build a new design of tug.

After the usual quiet holiday period, activity is back in full swing with news dominated by deliveries and orders for Damen and more design success for Robert Allan Ltd (RAL).

The holiday season usually brings with it a hiatus in news, not so in the world of tug construction within Europe with eight vessels to mention along with an order for a Damen ASD tug from Cyprus.

While orders have been reported of late which we will return to, here we look at five notable deliveries involving familiar names in the European arena.

Recent weeks have seen a steady stream of news on the delivery and order front with strong European domination but also including global involvement within the tug building industry.

Eight tug deliveries and one order are reported this month including news of four and fifteen vessel series orders for operation in the Caspian Sea and Indonesia.

Turkey’s Med Marine has taken delivery of a powerful ASD built by Ereğli Shipyard: a Med Marine Group company. Peter Barker takes a closer look at this latest in a series.

This month, while we report on three tug deliveries the news is dominated by orders for no fewer than sixteen vessels indicating a continuing appetite for owners to replace existing tonnage, and service new contracts.

Fill out the form below to subscribe to our newsletter to receive the latest news updates and relevant industry insight.

Join over 31,000 professionals on the Maritime Journal email list!


Click here to ensure this message does not show up again