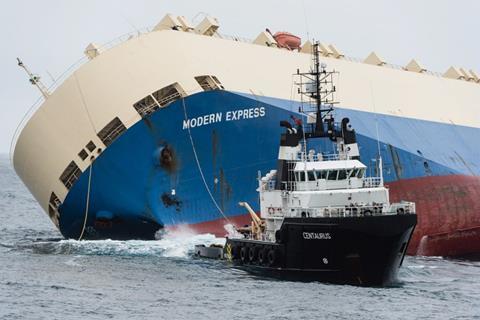 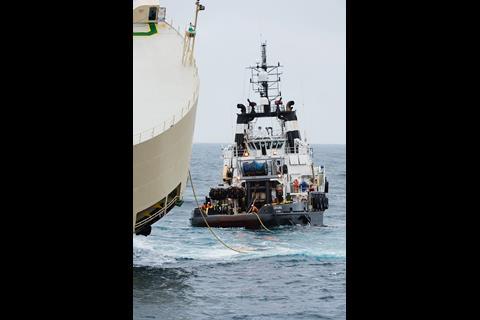 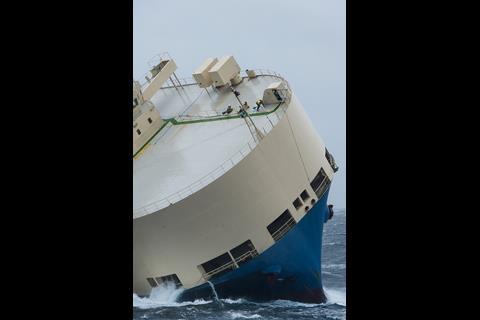 A listing and abandoned vehicle carrier has been towed to safety after drifting perilously close to shore, highlighting once again how professional salvors are ready to intervene to prevent environmental damage.

In January 2015 the vehicle carrier Hoegh Osaka attracted widespread media interest while stranded on a sandbank in the Solent shortly after leaving Southampton. Purposely grounded after developing a list the vessel was safely refloated and towed to Southampton some three weeks later.

Earlier, in July 2006 a similar vessel, the Cougar Ace developed a severe list south of the Aleutian Islands while on passage from Japan to Canada. Again salvors were able to recover the vessel in a long and tricky operation which sadly claimed the life of a member of the salvage team.

The sight of these vessels, which look a little odd even when upright, listing at seemingly irretrievable angles guarantees widespread media coverage and these two incidents immediately came to mind when recently another large vehicle carrier encountered problems in the Bay of Biscay. It was another reminder of the importance of a suitably equipped (and rewarded) professional salvage industry in saving life, protecting the environment and recovering the value of ships and cargo.

SEVERE LIST
The 10,817dwt Modern Express was on passage from Gabon to Le Havre when, in late January it issued a distress call reporting a severe list some 150 miles off Cape Ortegal Spain, roughly half-way across the Bay of Biscay.

The priority in such incidents is of course the safety of the ship’s crew and a rescue operation swung into action. The vessel’s position in the middle of the Bay of Biscay involved both French and Spanish authorities with coordination of the rescue itself carried out by Spain’s search and rescue agency Salvamento Maritimo assisted by UK Coastguard’s operations centre at Falmouth. Two Spanish rescue helicopters successfully rescued all 22 members of the ship’s crew who were landed ashore at La Coruña and Viveiro in Spain.

Both Spain and France operate a fleet of ETVs and tugs from both countries including the Bourbon/Les Abeille owned Abeille Bourbon were despatched to the scene. With the crew safely ashore, attention turned to recovering the vessel itself now adrift and unmanned with a list of around 50’. Rotterdam based Smit Salvage were contracted to recover the vessel and soon had a team on scene assessing the situation and devising a salvage plan for approval of the national authorities.

Aerial pictures of the vessel presented the scene of a ship obviously in an extremely precarious condition, seemingly just one extreme roll away from capsize. Close examination established however that Modern Express was in a stable condition albeit somewhat precarious in gale force winds and five to six metre seas.

Salvors and the authorities ashore faced one of the classic dilemmas that presents itself on such occasions, how to arrest the inexorable drift of the vessel towards a hostile shoreline around 200 miles to the east. Modern Express was drifting at around three knots and it was clear the clock was ticking to avoid an environmental disaster along with the added complication of recovering the vessel should it run aground.

National authorities continued to monitor the ship’s situation with the French warship FS Primauguet on scene along with two Spanish tugs and the Bourbon owned AHTS Argonaute. A key player in the unfolding drama was to be the Harms Bergung owned tug Centaurus now also on scene. The priority was to stop the eastward drift of the vessel but of course this could not be achieved without having personnel on the ship itself to make the towing connection.

ABSAILORS?
After a delay through bad weather a Lynx helicopter from the French naval vessel was able to transfer a four-man salvage team to the Modern Express but a deterioration in the weather thwarted an attempt to connect a tow line to Centaurus. The team had to leave the ship overnight and it was reported that one had suffered minor injuries.

One challenge facing the salvors was working safely on a vessel listing at an extreme angle where the decks no longer presented a level surface. Smit’s salvors were prepared for this and equipped with abseiling equipment but the skill and endurance required to move around in such an environment, not to mention connecting a towline is a tribute to the tenacity of those involved.

The degree of urgency heightened as the vessel continued to drift to within 50 miles of the French coast where preparations were being made for a possible grounding. The salvage team were able to re-board the Modern Express and at last a towing connection was established with Centaurus and with a lot of people no doubt holding their breath the vessel was able to be very slowly towed away from the shoreline.

With steady progress being made and the ship considered as no longer presenting a risk attention turned to an issue regularly debated in the salvage world, finding suitable ports of refuge. It was considered that Modern Express could best be returned to an even keel while alongside and on this occasion the port of Bilbao agreed to accept the vessel which was safely berthed around two days after being taken in tow and just six days after the drama began.

In summary this operation will go down as a classic example of where thanks to the skill and bravery of the rescuers, the ship’s crew were rescued from a situation they understandably considered irretrievable. Of equal significance is another example of professional salvors and responders delivering the skill, courage and ingenuity to avert a potential environmental disaster providing a new context to the expression ‘just in time.’